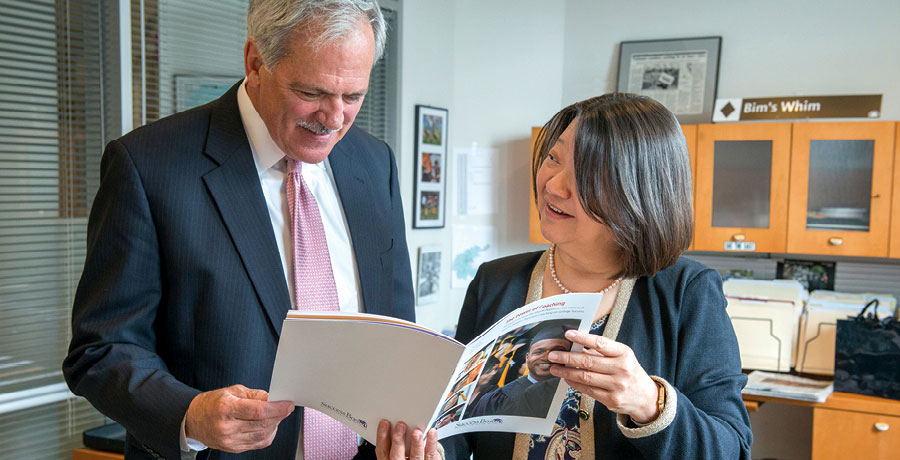 Presidents of their respective institutions, Pam Eddinger and Paul Grogan explore the role of public higher education, the impact of experiential learning on developing a workforce for the future, and the importance of investing in structural reform to increase college completion rates for Boston’s young people.

As President and CEO of the Boston Foundation, Paul Grogan has headed the nation’s first grant-making organization through its centennial and its evolution to the leadership institute it is today. Through all of the great chapters in the city’s development, the Boston Foundation has been a bedrock of encouragement of civic leadership and the driving of public policy.

Under Grogan’s leadership, the Boston Foundation has focused on strengthening the city’s and region’s educational pipeline–from the very youngest learners, to K-12 education and on through college completion and into careers. In 2008 the Foundation launched Success Boston, implementing a three-part strategy—getting ready, getting in and getting through—to ensure Boston Public Schools students are prepared to meet the challenges of higher education and achieve a degree that will allow them to thrive in the workplace.

President Pam Eddinger (PE): The Boston Foundation celebrated its centennial within the past year. Congratulations. You’ve now been leading this organization for about a decade and a half.

Paul Grogan of the Boston Foundation (PG): Yes, more than 15 years. It’s hard to believe. It feels like I’m just getting started.

PE: Well, you seem to be leading with as fresh an approach as you had when you first began! Looking back at the Foundation’s history, what has changed and what has stayed true and constant in its mission?

PG: The Foundation really does three things. First, we’re privileged to be the stewards of a large amount of the philanthropic capital available within this community. And second, we provide more than 100 million dollars in grants each year, mostly to Boston-area nonprofits. The third thing we do—which we’ve purposely pursued more recently—is the civic leadership function, where we use the good offices of the Foundation to help our community define and act on its challenges and opportunities.

During the centennial, we discovered a distinctive role of the Foundation in what you might think of as the philanthropic ecosystem. That is, the Foundation has provided seed capital to an astonishing number of nonprofit organizations that are now household words in our community–the New England Aquarium, The Greater Boston Food Bank, Neighborhood Health Centers and Brigham & Women’s Hospital. The Foundation has a history of being a place of ideas. In that I think we very much remain true to our history. 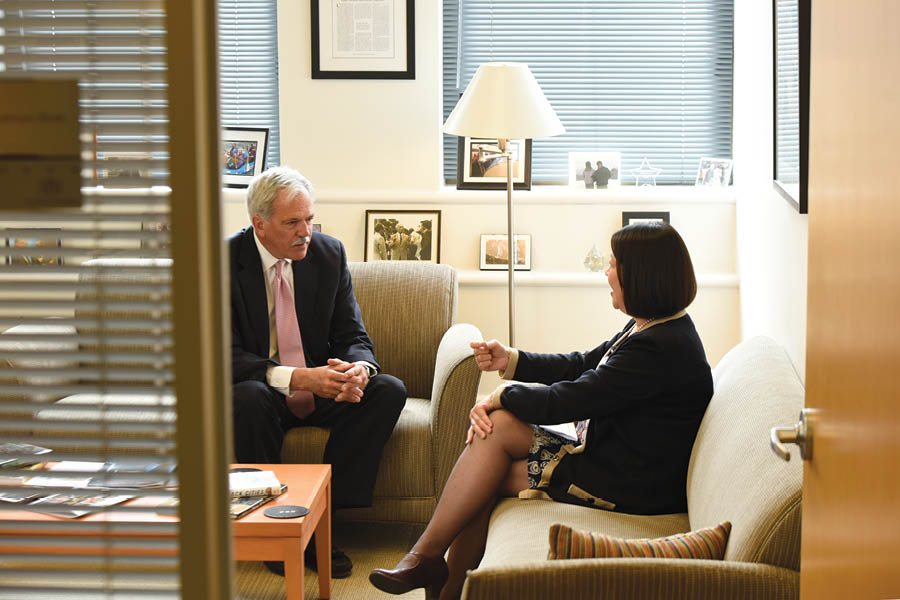 PE: It’s interesting to see your perspective over this long period of time. The Boston Foundation is a focus and center of collective effort and the impact of that convergence has been eye-opening for me.

PG: This is music to my ears, and I have to give credit to our extraordinary board of directors who in 2001 articulated a more expansive vision for the Foundation as a leadership institute. This is exactly what we wanted the Foundation to be–a place where people come to talk, exchange ideas and plan.

PE: It shows a wonderful convergence of leadership, and the ripening of a beautiful institution. I’m particularly interested in your vision of education in the city. We are in a starfield of top-tier Ivy League universities and colleges. Given that, what do you make of public education in Boston?

PG: The Foundation has been deeply involved for many years, particularly in public K-12 but more recently in higher education as well. I think we know the things that work very well, and we’ve been pushing very hard, but incremental change in the K-12 system is not going to get us there. We need to think more radically.

We’ve had the illusion that because we have these storied private institutions that are so well known, public higher education isn’t as important in Massachusetts as it is elsewhere. That turns out to be totally wrong. We are very dependent on the quality of public higher education. It’s where most of the kids are going to go, and where tomorrow’s workforce is going to come from. It has to be absolutely first-rate.

As a slow-growing state with an aging population, we need to pursue productivity in new ways. That is why in 2012, we asked then Governor Deval Patrick to bring forward community college legislation, which has brought some new funds, some new accountability and some governance changes. 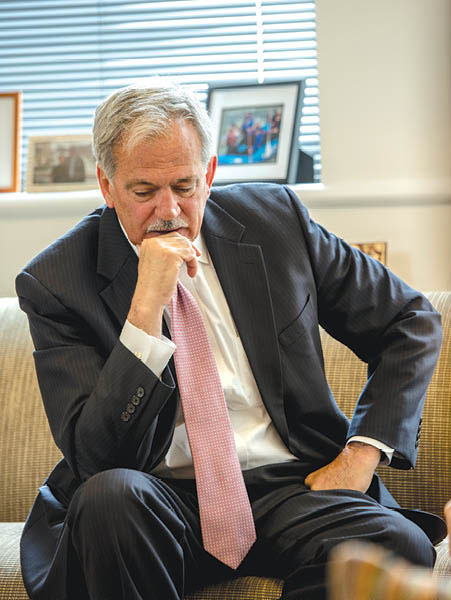 PE: It’s a new narrative tied to the mainstream narrative of workforce and talent development.

PG: Right, and Bunker Hill Community College has done something very important, which is to send a strong signal to the business community that you’re open for business and that you want partnerships. The Learn and Earn program is a great example of this. Working with the Massachusetts Competitive Partnership and some of the biggest companies in the state, this program is something I think will be copied by other community colleges.

PE: I was thinking the other day, “What will it take to have every student in high schools and at community colleges have an experience in business and industry? How many internships is that?” To me, it’s the last frontier of breaking through. And I see the Boston Foundation again offering that place of convergence.

PG: More and more leaders of companies in the life sciences and technology sectors are realizing that they need to be active on the workforce front or the workforce just isn’t going to be there. For example, we’re working with the Venture Capital Trade Association on Hack.Diversity, which provides high-quality internships to mostly African American and Latino college-age students, giving them meaningful private-sector work experience. While it’s great to have some models like that, we’ve got to stay with it. And the Boston Foundation sticks with things.

PE: You have been the central connector in the Success Boston initiative. Talk about the genesis of that, and whether we are halfway to our goals.

PG: We are now defining the success metrics as completed post-secondary education of some kind, and that wasn’t the situation just a few years ago. Through Success Boston, we’ve taken on the whole issue of college completion. It’s a case where our approach was reshaped when research unveiled a picture that was very unattractive. The study, funded eight years ago by the Boston Foundation with Northeastern University and the Private Industry Council, showed disappointingly low college graduation rates for Boston Public Schools graduates who had enrolled in college. That was a shock because up until that point, we had been feeling pretty good about Boston having one of the highest college enrollment rates of any urban school district. So Success Boston provides a coach free of charge to every single graduate who wants one—a coach who helps them navigate not only the academic challenges, but the logistical, financial and even emotional challenges of college that they may be first in their family to face—and this is making a very significant difference in graduation rates.

PE: The report on the Success Boston Transitional Coaching Project is out with positive findings. The federal Social Innovation Fund grant is also well into its second year. Has your understanding of the role of transitional coaching changed over time? Is your faith in this practice holding?

PG: We’ve gone from graduating about 39 percent of the kids to over 50 percent, and we think that will continue to improve. In the last several years, thanks to the Social Innovation Fund, we’ve been able to expand the program from 200 to 300 students to more than 1,000 every year.

PG: There are some promising things happening in education, but it’s going to take a lot of effort to realize the potential we’ve now identified. I hope we can maintain and build upon the qualities the Foundation has: being able to recognize good ideas, credibility, strong relationships throughout the community and being a trusted institution. We’re going to work very hard to make sure the Foundation remains a great instrument of change across a wide variety of fields.