Roxane Gay’s work garners international acclaim for its reflective, no-holds-barred exploration of feminism and social criticism. Bad Feminist, a collection of essays, was named one of the best books of the year by NPR and declared “trailblazing” by Salon. Her debut novel, An Untamed State, was long-listed for the Flaherty- Dunnan First Novel Prize. In 2017, Gay released Hunger: A Memoir of (My) Body and a collection of short stories titled Difficult Women. Gay’s writing has appeared in The New York Times and many other renowned publications. She recently became the first black woman to write for Marvel, penning a comic series in the Black Panther universe called World of Wakanda.

Roxane Gay reads from her book “Hunger: A Memoir of (My) Body”

Named “America’s brightest new essayist” by The Guardian, Gay is the author of New York Times bestsellers Bad Feminist and Difficult Women. She recently became the first black woman to write for Marvel, penning a comic series in the Black Panther universe called World of Wakanda.

Gay’s work garners international acclaim for its reflective, no-holds barred exploration of feminism and social criticism. At Thursday’s event, she read excerpts of Hunger: A Memoir of (My) Body, a book that explores what it means to be overweight in a world where body size and image is a focal point, and the struggle of overcoming trauma. 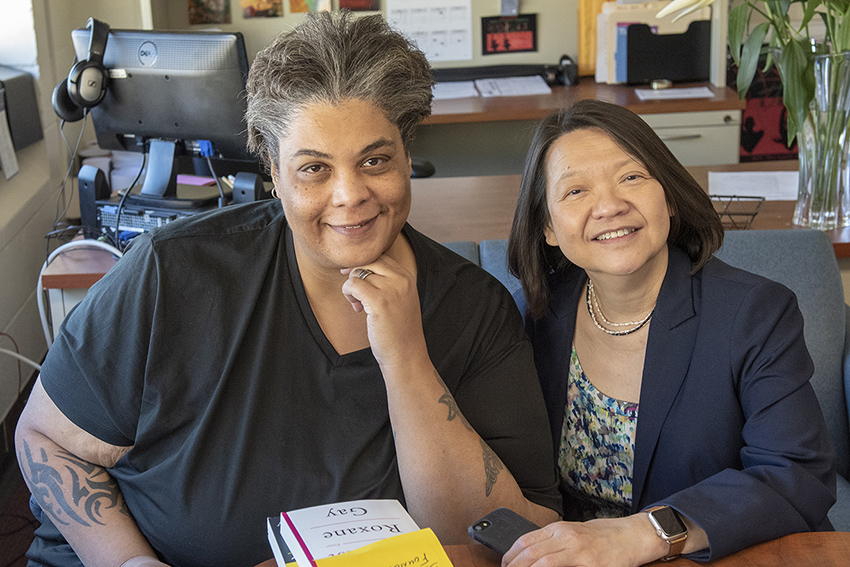 From Hunger, Gay shared with the audience her distaste of exercise, her love for Ina Garten and The Barefoot Contessa and the joy that comes from enjoying the Haitian cuisine of her childhood, before opening the discussion to student questions.

“When I write, especially when I write something personal, I tell myself that no one is going to read my work,” said Gay when asked how she’s able to balance truth in storytelling with personal humility. “If I think too much about audience, then I’m not going to have the courage to say the kinds of things that I most need to say, and I’m not going to be as honest as I need to be on the page.”

Trustee and BHCC alumna Cathy Guild delivered the opening remarks to Thursday’s presentation. “I came to Bunker Hill Community College as an adult learner, wanting to change my life not only for myself but for my children. I not only achieved my goal, but I also left confident in who I am and what I can be. I found a different life that opened up a multitude of opportunities, and through time, your goals too will be accomplished.”

In partnership with BHCC’s newly launched Center for Equity and Cultural Wealth, the series of speakers for 2018-2019 is intended to support meaningful and relevant discussion both inside and outside the classroom as part of the College’s ongoing exploration of power, privilege, equity and cultural wealth which served as the focus of the College’s first Equity and Cultural Wealth Institute in May 2018.