Bunker Hill Community College (BHCC) student Valter Gomes was one of the 29 outstanding 2013 graduates of Massachusetts public colleges and universities honored for academic achievement and community service at the State House on May 2. The “29 Who Shine” ceremony was attended by Governor Deval Patrick and state education officials. 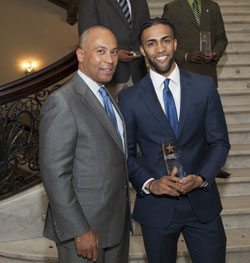 Gomes, a member of the Phi Theta Kappa honor society and the Commonwealth Honors Program at BHCC, was chosen for his academic success and initiative in promoting sustainability at the College. As co-president of the BHCC Sustainability Club, Gomes spearheaded a campaign called “Rethink the Way You Drink,” which resulted in the installation of a water hydration system at the College’s Charlestown Campus.

The event also honored mentors named by the 29 students for their guidance and support. Gomes selected Michael Dubson, Associate Professor in the BHCC English Department, who also attended the ceremony. Gomes said “Michael Dubson is a friend who has always inspired me to dig deeper within myself, think outside the box, and use my education to express what I think is right for myself and others.”

The first in his family to graduate from college, Gomes, a mentor in the College’s Learning Communities program, helps new students make a successful transition to college life.  He returns to East Boston High School each year to speak with graduating students about how to avoid gang life and overcome educational barriers.

Gomes plans to continue his education at a four-year university, studying the intersection of economics, business and sustainable development. His goal is to create a business that uses sustainable materials to develop high-quality, affordable products that do not compromise the environment or our natural resources.