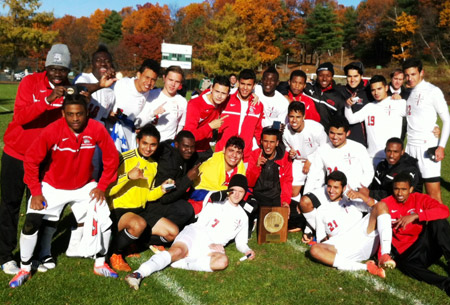 The men’s soccer team, 17-3, has had an exceptional season. The team finished first in the conference regular season, earning the Massachusetts Community College Athletic Conference (MCCAC) Championship. They went on to beat Holyoke Community College and then Bristol Community College to clinch the NJCAA Region 21 Tournament. Region 21 includes all of the New England states.

As the Region 21 Tournament Champion and the No. 4 ranked team within NJCAA Division III, the Bulldogs will enter the first round in the Division III National Championships as the fourth seed, taking on Richland College of Texas at 1:30 p.m. on Thursday, Nov. 14, at host Herkimer Community College.  The final championship game will be played on Sunday, Nov. 17.

The team’s success is all the more remarkable as only three of the 24 players are returning students and the two assistant coaches, Diego Ettedgui and Jonathan Takano, are new this year.

But BHCC has an experienced leader in Science and Engineering Department Professor Scott Benjamin, now in his 11thyear as head soccer coach. Last year, the team made it to the Final Four of the Division III National Championship before losing, the farthest a BHCC soccer team has ever gone.

Now, Benjamin has even higher hopes.

“This year, we beat the team that was ranked number two in the nation [in Division III of the NJCAA],” said Benjamin. That was Montgomery College of Montgomery County, Maryland. “When we beat number two, that really struck the guys – that we really could be the top team in the nation.”

Like BHCC itself, the soccer team is a diverse group; players hail from Sweden, Morocco, the United Arab Emirates and Nigeria, as well as from Boston, Chelsea and Everett. Other players have families from Honduras, Brazil, Panama, El Salvador and Colombia.

“It’s been an ongoing cultural team building process,” Benjamin said. “Over time the players have learned to think of the importance of the team.”

Benjamin, Ettedgui and Takano have focused on instilling a positive mental attitude:  “We’ve been teaching the guys to be mentally tough and to recover from mistakes and come together as a team,” Benjamin said.

That training will be put to the test beginning Thursday, Nov. 14.