Danny Glover and Felix Justice presented the work of Martin Luther King and Langston Hughes to a Bunker Hill Community College audience on November 12 as part of the College’s Compelling Conversations speaker series, a program that has brought high-profile politicians, authors, news commentators and filmmakers to the Charlestown Campus for 10 years. 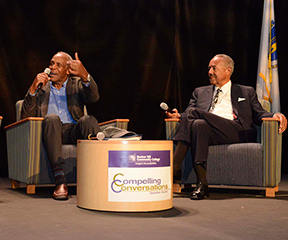 ‌“An Evening with Martin and Langston” acknowledged the enduring power of the poetry of Langston Hughes, a leading figure of the 1920s Harlem Renaissance, and commemorated the 50th anniversary of King’s “I Have a Dream” speech during the 1963 March on Washington.

“I look at Dr. King and Langston Hughes as prophetic in the sense they were truth speakers,” said Justice, who has long created performances based on King’s speeches. “Their messages are, if anything, more relevant today.”

Glover (“The Color Purple,” “Lethal Weapon”) emphasized King’s grand vision. “In Dr. King’s last book, he talked about war, the relationship between militarism and racism and materialism; those were his ‘axes of evil,’” he said. “By the time Dr. King was assassinated, he had gone beyond being a civil rights leader to being a human rights leader.”

In his performance, Glover brought Hughes’s poetry to life with a reading that seamlessly wove together several of the author’s key works including the 1921 poem “The Negro Speaks of Rivers,” Hughes’s signature poem.  Justice’s presentation included a 1968 speech in which King declared he wanted to be remembered as “a drum major for justice, a drum major for peace.”

During a question and answer period, both spoke about the need for young people to go beyond social media to social action. “You have to take to the streets once in a while,” Justice said.

The next Compelling Conversations series continues with actress/activist Marlee Matlin on February 27, 2014.