Volunteers from across the region joined students, faculty and staff at Bunker Hill Community College on Saturday, October 19 to plant 13 new trees on the Charlestown campus grounds. The Odwalla company and The Nature Conservancy sponsored the planting, which is part of a larger commitment to plant a total of 130,000 trees during 2013 in forests and urban areas nationwide. The Boston Natural Areas Network also took part in the event. 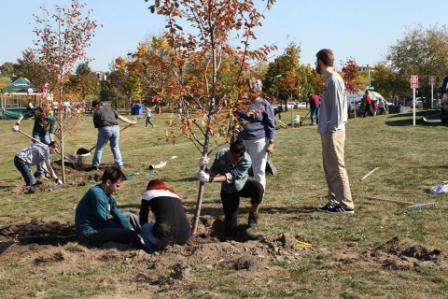 The red and white oaks, pine, spruce, red chokecherry and other trees were installed adjacent to the College’s LEED Gold-certified Health & Wellness Center, a structure designed to take advantage of natural light, conserve water and reduce energy requirements for heating and cooling. The building has been recognized by the Green Education Design Showcase.  A winter weatherization of the College’s urban gardens by members of the College’s Sustainability Club and students in the Energy and Sustainability Management program was part of the event.

The trees planted at Bunker Hill Community College were the result of Odwalla’s six-year-old Plant-A-Tree program. Recognizing the vital role of trees in removing carbon dioxide from the atmosphere, the company, which makes natural beverages and bars, offered to plant a real tree for every virtual tree created by visitors to its website. This year, the goal of 100,000 trees was surpassed, and together, the Nature Conservancy and Odwalla are facilitating the planting of 130,000 trees with the help of local nonprofit groups like Boston Natural Areas Network.