Former WBZ-TV news anchor Liz Walker shared her story of personal transformation and career-change with a Bunker Hill Community College audience on February 13 as part of the College’s celebration of Black History Month. The College’s Office of Diversity and Inclusion sponsored the talk, titled “Taking Risks to Serve the World.” 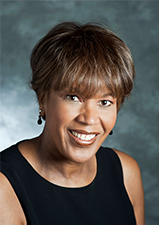 Walker, now an ordained minister, described her 2001 trip to South Sudan to investigate allegations of slavery and human trafficking. “I wanted to be the objective reporter who didn’t take sides,” she said. “But I went to a place that forced me to step outside the comfort zone of objectivity.”

The experience prompted Walker to reexamine her life and led to a decision to leave journalism and pursue ways she could bring relief to the people of South Sudan. “It was a really hard thing to do,” she said of her journey from local celebrity to humanitarian. “But the stories of the people I met touched me so deeply that I could never be the same afterwards.”

Walker earned a master’s degree in theology from Harvard Divinity School in 2005. She said that her church has adopted two Boston public schools—Higginson-Lewis K-8 School and Dearborn Middle School—to help students access education more easily. “It’s amazing,” Walker said, “that many of the same needs I saw in Africa can be found right here in Roxbury.”

Walker urged the audience of students, faculty, staff and guests to work to move the world forward. “No matter who you are or what you do, you can make a difference,” she said. “You don’t have to do it all, but you have to do something.”