On Friday, May 15, 2015, twelve students from seven countries celebrated the culmination of a year of hard work at Bunker Hill Community College. They came to Boston from countries as far-flung as Bangladesh, Colombia, India, Indonesia, Pakistan, South Africa and Turkey. The students were part of a U.S. State Department program called the Community College Initiative Program (CCIP) aimed at promoting partnerships and resource sharing among global communities. 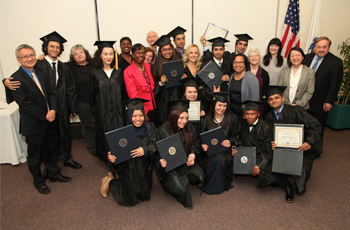 Vilma M. Tafawa, Executive Director of the International Center, opened the program, and students were recognized for the successful completion of the program by President Pam Eddinger, Associate Vice President Janice M. Bonanno, and Interim Dean of Mathematics, Behavioral and Social Sciences Maria Puente. Leeza Fernand, Associate Director of International Students and Sponsored Programs at Northern Virginia Community College, was on hand to greet and congratulate the students.

Students spent the year taking classes, meeting members of the Boston community and gaining practical experience through internships. The group completed more than 1,600 hours of volunteer service at Boston organizations that included the American Red Cross, City Year, GLAD, Habitat for Humanity and the Prison Books Program. Students also interned at the City of Chelsea, the Commission on Affairs of the Elderly, Jumpstart, the Tenants’ Development Corporation and Touch 106.1 FM.

It was graduate Molwanwta Letlhake’s first time traveling outside of South Africa. While at BHCC, he became a member of the College’s Entrepreneurship Club. “I love Bunker Hill Community College for giving students the best education and the utmost support,” he said.  “My professors enjoyed their job. They were friendly and supportive, and I could see that they valued education more than anything.”

View more photos from the CCIP Ceremony on the Ceremony Highlights page.