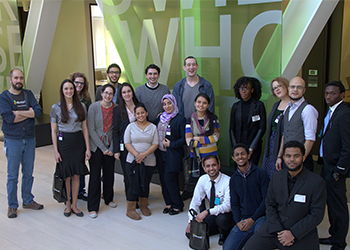 Working closely with full-time engineers at Microsoft’s New England Research and Development (NERD) Center in the heart of the Kendall Square innovation hub, the students are designing and delivering fresh Garage programs, including a revamped employee maker space and community technology initiatives.

“We couldn’t be more pleased that these motivated students have earned incredibly competitive internships at the Microsoft Garage,” said Pam Eddinger, President of BHCC. “These internships, the contacts they’ll make and the experiences they’ll have, are a great first step towards a high-demand career in the technology industry.”

The Microsoft Garage is a resource to employees that supports and encourages problem solving in new and innovative ways. Garage programs attract the relentlessly curious - those who like to dig in and make something. In addition to the internship and maker spaces, the Garage produces the largest private hackathon on the planet and is the official outlet for experimental projects from teams across the company. The Garage is expanding to more community outreach this year, and BHCC interns are helping build the program.

Modeling this spirit of innovation and push to expand its reach for diverse, qualified talent, Microsoft expanded its internship program this year to include students from two-year colleges.

“When the team and I came out to BHCC to conduct interviews, we were impressed with the skills and entrepreneurship that the students demonstrated,” said Microsoft Garage Chief Intern Officer Ben Fersenheim. “I’m thrilled that we were able to find as many strong candidates as we did, as this means we have the potential to deliver on so many more fun and impactful projects this spring.”

More than 150 students from BHCC attended an information session in January to learn more about the internship program. “We were excited to hear Ben Fersenheim talk about what goes on in the Garage; how curiosity is pursued and how creative freedom is encouraged,” said Computer Science major Mussie Demisse, “But what excited me most was how inquisitive he was about the ideas we are passionate about.”

Bunker Hill Community College is the largest community college in Massachusetts. The College enrolls more than 14,000 students on two campuses and at three satellite locations. BHCC is one of the most diverse institutions of higher education in Massachusetts. Sixty-four percent of the students are people of color and more than half of BHCC's students are women. The College also enrolls nearly 1000 international students who come from 107 countries and speak more than 75 languages.