U.S. Secretary of State Antony J. Blinken will be the keynote speaker at Bunker Hill Community College’s (BHCC) 47th Commencement exercises, in a virtual celebration on May 27 at 6 p.m. 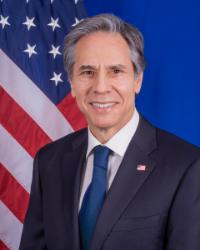 “We are honored to have Secretary Blinken as this year’s Commencement speaker,” said BHCC President Pam Eddinger. “His commitment to fight for the interests and values of the American people and his insistence on equity and opportunity speaks to the very heart of Bunker Hill Community College”.

In addition to serving in President Biden’s administration, Blinken served in the Obama and Clinton administrations spanning over three decades shaping U.S. foreign policy. Blinken is a graduate of Harvard College and Columbia Law School.

BHCC Deans will be reading the names of graduates in each of their divisions. There will be a special recognition to nine early college graduates who will receive their associate’s degree and high school diploma consecutively.

Learn more, including links to the event at bhcc.edu/commencement