Bunker Hill Community College (BHCC) broke ground on a new Student Success Center building on Tuesday, April 26, the first new building in more than a decade for the state’s largest community college and the first of several planned upgrades for the almost 50-year-old campus. 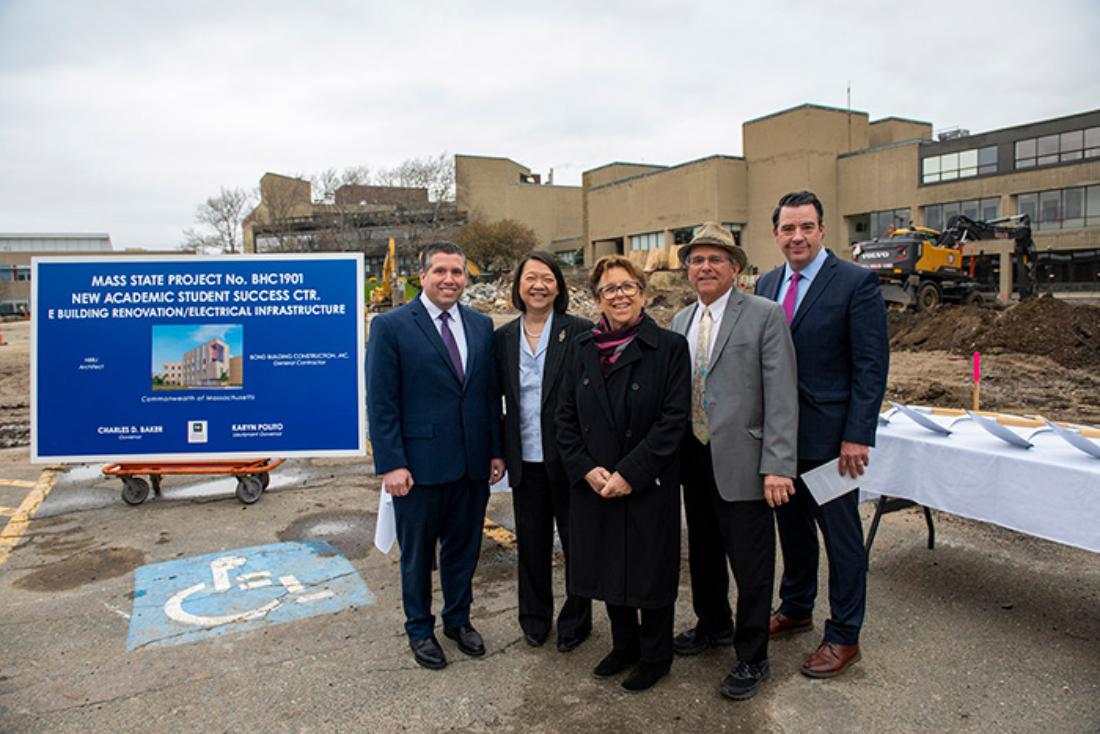 “Today, we not only mark the beginning of a new building project, but the advent of the next half-century as we reimagine the community college story in this region and this country,” said BHCC President Pam Y. Eddinger. “This building…is a down payment on a renewed future—of our College, our communities, and our students.”

All but one of the College’s current buildings were constructed almost 50 years ago and designed to accommodate around 5000 students. However, in recent years, the campus has housed more than three times that number, and the aging buildings have accumulated a backlog of deferred maintenance.

“Today, these buildings are the collegiate home to around 18,000 learners annually, more of them students of color than white, more of them women than men, more of them than ever immigrants and the children of immigrants than born here. But they are also more likely to be food insecure, live paycheck to paycheck, support families with their earnings, and be first-generation college students than those of 50 years ago,” said BHCC Board Chair Bill Walczak. “The students have changed—the challenges have changed—but the buildings have not. So, we’re here today not just to mark the construction of a new building, but to begin the renewal of our campus and our mission.”

State Senator Sal DiDomenico was a guest at the College’s previous groundbreaking ten years ago and praised the College's fidelity to its mission of serving students and all their needs. “It’s no surprise, after ten years, that you’re breaking ground on a new building that is dedicated to our students,” DiDomenico said. “That tells you something about the culture of this school that after ten years…that the main focus of this building is to provide services to our students. This is a renewal of this College, and I am just so proud to be [BHCC’s] Senator.”

State Representative Daniel Ryan, a graduate of Bunker Hill Community College, reflected on the College’s history and that of its campus. “If you lived around here long enough, as my parents did, you’d call this not the Gilmore Bridge, but the Prison Point Bridge,” Ryan said. “Because on this ground was a state prison for 200 years. There is no better symbolism than to build a student support center on the grounds where a prison used to stand. I think that shows the vision that we had 50 years ago. I think this bridge also symbolizes the connectivity between the jobs and the higher education institutions around the great city of Boston that these students will be able to access.”

The building’s planning, engineering, and construction are led by the State’s Division of Capital Asset Management and Maintenance (DCAMM), and BOND Building and Construction. NBBJ is the project architect.

“We are grateful to be collaborating with the Bunker Hill Community College leadership, DCAMM and NBBJ on this project that is so meaningful to the campus community,” said Frank Hayes, President of BOND Building.  “Once completed, this building will provide much needed additional space and resources and will mark the beginning of an era of growth for the school that we’re proud to help kick off.”

When complete, the Student Success Center will be home to the College Library & Learning Commons, academic advising, and wrap around student services that help support BHCC’s students, the majority of whom are students of color and are first generation college students.

The three-story, 56,500-square-foot building will be constructed on the West Lawn of the College’s Charlestown Campus. Based on Passive House principles, the building’s exterior enhances the college’s visual engagement with the community. The building is designed to be Net Zero Energy-ready, integrating a geothermal well field on campus. It is engineered in anticipation of a future photovoltaic array. Additionally, the building uses a highly insulated, high-performing envelope and anticipates projected sea-level change and the rise in base flood elevation by shifting all critical building systems, including the emergency generator, to roof level.