A U.S. Army veteran who was captured and held as a POW in the opening weeks of the war in Iraq brought a message of endurance and fellowship to Bunker Hill Community College on Nov. 7, as part of the College’s recognition of Veterans Day. 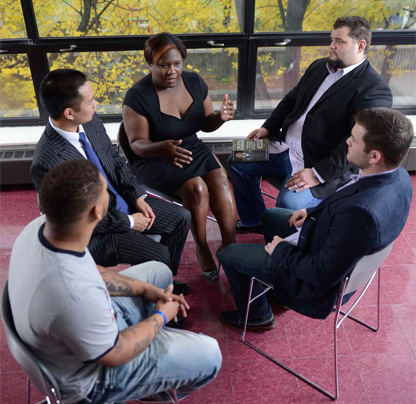 Shoshana Johnson, the first black female prisoner of war in U.S. military history, told a BHCC audience about the brutal ambush of her convoy in Iraq in March 23, 2003, when 11 of her fellow soldiers were killed. Shot in both legs, she and other members of her unit were captured and held for 22 days. “The capture was not pretty. It was rough. We were beaten,” she said. “It was something you never thought would happen to you.”

On the 22nd day, they were rescued by U.S. Marines, three hours after the Army received information on their location. “I’m still in awe of what they did,” Johnson said. “They put their lives on the line so I could go home to my child.”

But her battle did not end there. Johnson described the difficulty of adjusting to civilian life, of suffering from post-traumatic shock and of re-establishing ties with her two-year-old daughter. “We didn’t know that the whole world knew we were captured,” she said. “It was difficult to deal with all eyes on you. You’re struggling to recover physically and mentally.”

Johnson had a special message for veterans in her BHCC audience: “Don’t be afraid to share your burden. We shared the burden in combat; we can share the burden now.”

She spent the afternoon at BHCC talking to veterans and students, enjoying a lunch created by the Culinary Arts Department, and making heartfelt remarks before an audience in the auditorium. Slipping off her shoes (she still suffers from the effects of her leg wounds), she kept her audience by turns spellbound or laughing with stories about joining the Army to help pay for a culinary arts education, struggling through basic training, becoming an Army cook, and winding up in a convoy that took a wrong turn in dangerous terrain.

She spoke of her first request after being rescued: clean clothes and toilet paper. She talked about celebrities she had met and about the cold glare of the media spotlight. She commented on the controversy sparked by the comparatively greater publicity surrounding the capture and rescue of Jessica Lynch—who was in Johnson’s unit.  But Johnson considers Lynch a dear friend and explained it was her own choice to delay writing about her experience. “If I hadn’t have taken a step back to get myself together, I would have gone nuts,” she said.

Eventually she told her story in “I’m Still Standing: From Captive U.S. Soldier to Free Citizen,” a book published in February 2010. “I hate it when people are telling me what happened to me,” she said. So she wrote the book to explain the capture from her point of view; she says she does not presume to tell the stories of the men held with her—men who still count among her close friends.

Asked about the current debate over the role of women in military combat, Johnson said, “As a female, I feel that we have been in combat from the day we were born.  Especially in other countries, women have to fight to get an education. You fight to support your family. As a woman you are twice as likely to be a victim of a crime.

“Whether you want to acknowledge it or not, women are already in active combat. I mean, I was shot and captured – as a cook. So what are you protecting me from by keeping me from gunnery and artillery training? It doesn’t make any sense.”

Johnson is a community college graduate with a degree in culinary arts from El Paso Community College.

Her visit to BHCC was co-sponsored by the BHCC Veterans Center and the BHCC Office of Diversity and Inclusion.