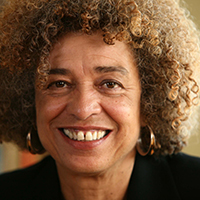 ‌University of California Santa Cruz Distinguished Professor Emerita and author of ten books, Angela Davis is deeply involved in movements for social justice around the world. In the early 1970s, Davis spent eighteen months in jail and on trial after being placed on the FBI’s “Ten Most Wanted List.” Today, her work focuses on the social problems related to mass incarceration and the criminalizing of communities affected by poverty and racial discrimination. Dedicated to the dismantling of the “prison industrial complex,” Davis urges us to consider the future possibility of a world without prisons in her presentation, “Institutional Racism in the Prison & Criminal Justice System.”

Refreshments will be served.