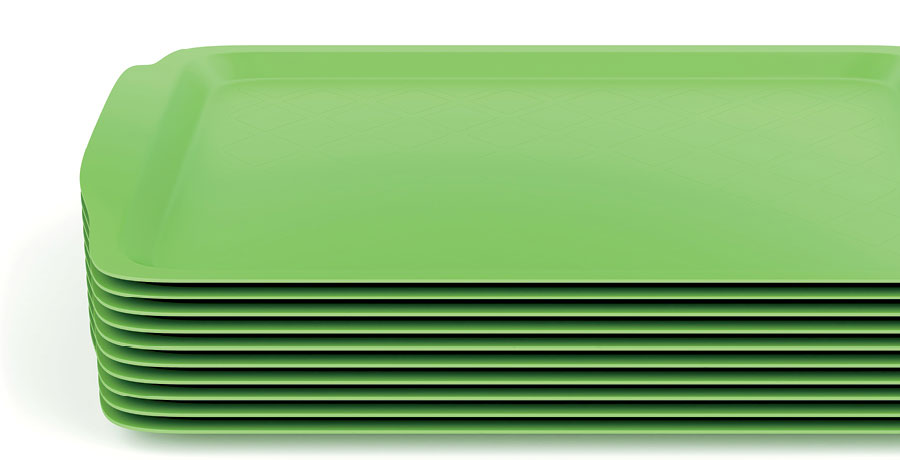 BHCC advocates for the basic needs of its students.

Never in a million years would I have predicted when I started community college work 25 years ago that hunger and homelessness would be barriers to a college education. 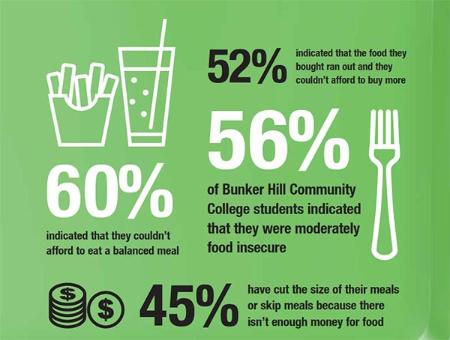 For the last decade, despite the difficulties we have faced as community college educators, the way forward has been defined, if complex. We focused on access, retention and completion. We doubled down on developmental math and English reform. We built guided pathways and early colleges. We advised and coached. We insisted on a culture of evidence. We created cohorts and learning communities. We called for the education of the whole student. But, in a fundamental way, we failed to address what a student needs to be educated.

“
A longer-term solution would be some form of free lunch or some form of [food assistance] program that would help students in college, not only community colleges, but the four years as well. Everyone wants economic growth for our country and everyone wants a larger middle class, and one way to do it is through education. If community colleges have 50 percent of all undergraduates, then that’s our solution.

Voices of Hunger on Campus 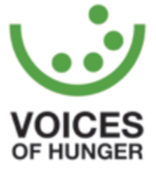 On Friday, May 5, representatives from colleges and community organizations from across the state joined Bunker Hill Community College to discuss a very real, very ugly, very urgent issue. Voices of Hunger on Campus, a first-time gathering of Massachusetts educators and community activists concerned about food insecurity and homelessness on college campuses, brought together leaders to address how that deprivation is affecting learning and student achievement; share approaches for helping students gain access to vital resources; forge meaningful partnerships between institutions and community partners to address these issues; and create a plan to implement institutional and policy changes to achieve better outcomes for students.

The gravitas of the headliners underscored the seriousness of the issue among our institutions. Higher Education Commissioner Carlos Santiago recalled how he recognized the pervasiveness of the problem when he found out that many of the high-achieving students who greeted him on his campus visits were homeless and food insecure. He came to Voices of Hunger with the announcement of new collaborations in the Massachusetts Higher Education System to provide transitional housing for homeless students. The Executive Director of Massachusetts Campus Compact came with similar pledges of collaboration, as did The Greater Boston Food Bank, Food for Free, Food Link and a number of others who heard the call.‌

Renowned Temple University Education Sociologist Sara Goldrick-Rab, whose new book Paying the Price: College Costs, Financial Aid, and the Betrayal of the American Dream enlarged our traditional understanding of the cost of education beyond tuition and fees, keynoted the event. She described her gradual recognition of the hunger issue, first witnessing it in her own classroom, then realizing the enormity of it through the field work of her graduate students and the research of the Wisconsin HOPE Lab she established. She has surveyed over 33,000 students at 70 community colleges across 24 states thus far. Bunker Hill Community College’s numbers are representative of what she was found at colleges across the nation: 56 percent of our students are food insecure, experiencing sustained episodes of hunger or nutritional crisis on a regular basis; 14 percent of our students are homeless, and more are housing insecure. The implications of the data are difficult to face. Yet we ignore them at our own peril.

During a listening session at Voices of Hunger, recorded student voices spoke our fears. When they are hungry, they lose focus. They choose between their train fare and lunch. They choose between their lunch and their children’s. They choose between food and books. They figure out where there might be free food, and plan their day around the availability. They depend on the peanut butter and jelly regularly stocked at the Single Stop office, for themselves, and for their children. They depend on the mobile food pantry or the daily donations by Panera Bread to make ends meet during the last week of their food stamp cycle. They take home packages of frozen leftover food from Food for Free to feed themselves and their families. The need is staggering. Yet they come to college, and try to persist. 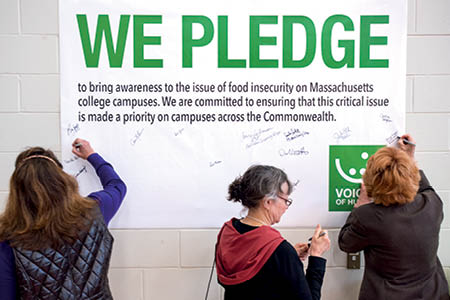 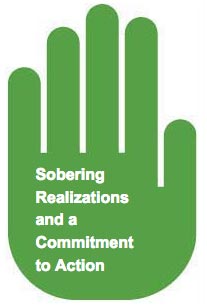 ‌We emerged from the Voices of Hunger convening with few answers, lots of speculations and an urgent sense of purpose that could not be dispelled. We made promises to ourselves and one another that morning:‌

• We each identified three top ideas on hunger triage and on policy steps, and promised we would do at least one thing to positively impact our campuses.

• We promised to compile a white paper on the proceedings of the day to document the high impact practices we shared and the partners we met and to sustain the practitioner community.

• We promised to monitor the progress of the study to be conducted by the General Accountability Office (GAO) on hunger on college campuses. Requested by Senators Warren, Markey, Stabenow and Murray at the urging of Massachusetts college leaders, the study will be a key step to policy discussions and solutions.

• We promised to return next year, when spring and commencement time comes around. We know it will take time to build long-term solutions. We are in it for the long haul. 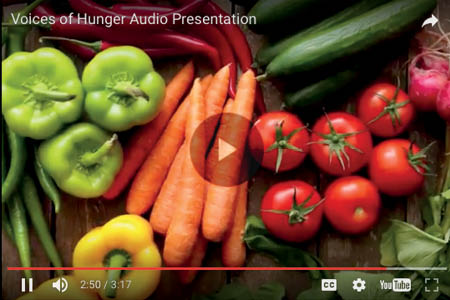 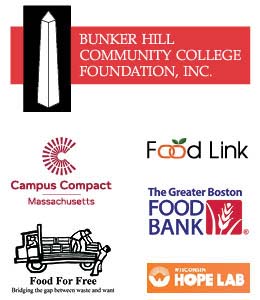 Voices of Hunger was organized by Bunker Hill Community College’s Hunger Core Team. The Core Team is a cross-functional group that includes the Single Stop director; a transfer counselor; executive directors from Institutional Research, Communications and the College Foundation; and the dean of students. If you are interested in organizing similar efforts on your campus or in your region, or would like to receive a copy of the white paper, please contact us at voicesofhunger@bhcc.edu. You can access images and sound recordings of the Voices of Hunger May convening at bhcc.edu/voh. 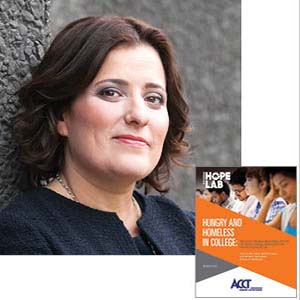 BHCC launched One Solid Meal (OSM) as a pilot program during the spring 2016 semester to address hunger and food insecurity on campus. Funded initially by a group of private donors, OSM provides $7 food vouchers to students who have been referred to the program by the Director of BHCC’s Single Stop office. The vouchers may be used in the College’s cafeteria, café and Culinary Arts dining room. All but one of the thirty students who participated in the initial phases of the program completed the semester—eight of whom have successfully graduated. A grant from the Boston Foundation, led by President and CEO Paul Grogan, made it possible for BHCC to continue the program into the 2016–2017 academic year. This fall, BHCC will expand the program to serve an additional 25 students currently on the waiting list through an Economic Mobility Grant from the Bank of America Charitable Foundation.